Crocopazzo! is a site specific installation,  performance, and film. The installation is a record of the play that took place at Galerie Isabella Bortolozzi in February of 2020. The film was shot in the gallery in the days before the performances. The 3 part installation was included the following year in 2021 in the exhibition A Fire in my Belly at the Julia Stoschek Collection. Starring MJ Harper, Finn Ronsdorf, Cassie Augusta Jorgenson, Nicki Fehr, Noah Lichtblau, Shade Theret, Gina Maiwald, Wieland Schoenfelder, and Roman Ole. 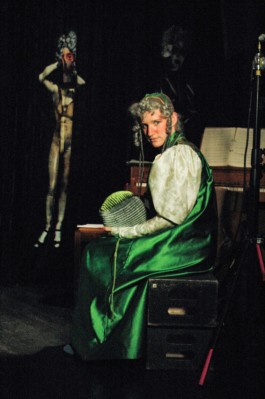 The plot: a hyperbolic comedy about a mother who guides her children with unconventional wisdom, employing strange therapeutic practices and unorthodox coping mechanisms as they make efforts to find meaning in their hapless and miserable lives.

A host — placing us in the middle of a tv talk show, or perhaps a psychoanalyst session — interviews the matriarch and her children, guiding us through the complexities of their peculiar ménage. A self-obsessed family, or perhaps a cult offering a paradigm of codependency, for sale and on display. The proposal: equilibrium is lunacy and self-betterment is the curse of capitalism.

Mother is exceptionally alive to language and gesture, to the layers of meaning in every utterance; Alive to power play and conscious and unconscious manipulations. She doesn’t see any pain, desolation or terror in madness.

She doesn’t glamorize it or claim it doesn’t exist. Rather she believes that the family could generate psychotic behavior in one member who was selected more or less unconsciously to bear the brunt of family dysfunction. Although sometimes it’s difficult to distinguish which member of this family has been chosen. Perhaps it is mother herself….

The 3 part installation includes the Green Room, the Stage, and the film.  The Green Room presented 8 mannequins dressed in costumes, depicting the characters from the play. For the Stage, a velvet curtain consisting of 29 panels, with individually designed digital collages hung as the backdrop of the play. A daybed also covered in printed velvet, finished off the simple setting along side the existing wooden alcove of the gallery. The play was both performed live and filmed in this room. The final room in the installation presented the film in its 80min entirety. 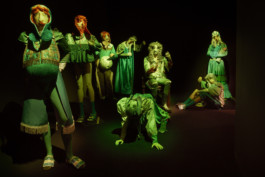